WHAT'S GOING ON BETWEEN POLICE AND BLACKS? 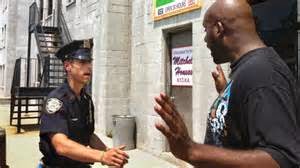 Blacks are naturally skeptical of Police and now the cops are even more scared of the black community. This has been going on for years in one form or another. So why all of a sudden do we have a rash of police beating and killing blacks and blacks killing police, leading to riots? The black community will tell us it is fed up with unjust treatment, and rightfully so. The police will tell us that blacks are prone to resisting arrest and in some cases completely uncooperative both individually and as a community. And there is credibility in this charge. This is a powder keg that has only seen the tip of its potential. Officers kicked a black man in the head in Dover, Delaware, with no obvious provocation. And now four blacks have shot and killed two Hattiesburg, Miss. police officers after being pulled over for a speeding violation. What is the sense in all this? The answer, of course, there is none. It will be tough to control the gangs, but most of the black people want this to end and now. And a large majority of the cops in this country have high standards dealing with the community, white or black; they really only want to protect and serve. I vote to put New York City's Police Commissioner Ray Kelly in charge of a task force to deal with this mess. He already has a great record running the policing of the largest U.S. city.
at May 11, 2015