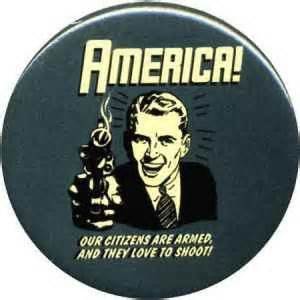 Following the Waco, TX, bike gang shootings where nine people were killed, it was only natural to bring up the issue of too many guns on the street again. It also is tragic that Americans continue to look on this kind of regularly occurring event as just normal in today's gun culture. It's not and it doesn't have to be. I have been saying this in recent years and John Traphagan of the Dallas Morning News has written a story in agreement with that point and several others I have talked about for some time. For example, he also believes that owning a gun should be tied to the universal background check and extensive training. Now is that asking too much? He continues...


"The solution to gun-related crime is not further arming the public. It involves enacting comprehensive gun control laws that prohibit many forms of gun ownership, significantly curtailing or eliminating access to and the ability to purchase guns..."

As a matter of fact, unlimited arming of the public is what has caused the crisis in the first place like Adam Lanza in Newtown, CT, who massacred 20 kids and six teachers at the Sandy Hook Elementary School using his mother's gun which was completely unsecured. It was a semiautomatic Bushmaster .223 caliber model XM15 rifle and he also took along two handguns and a shotgun, all hers. After shooting his mother he just picked up the weapons and went out on a rampage. And this woman knew her son was acting strange for some time, like covering his windows with black trash bags.

Thanks to the National Rifle Assn., this totally irresponsible person was able to maintain a fully equipped arsenal in her home and even with a gun closet, didn't see fit to keep it locked. Yet the gun rights bunch would have us put more guns on the street in the hands of other people just like this. Their cries that it is the criminals with guns that cause the problems has become meaningless since Sandy Hook, and Aurora, Colo. and Tucson, AZ, as well as all the dumb parents who leave handguns on the coffee table so their kids can spread theirs or their siblings' brains all over the couch.

It's disgusting and no one is listening, especially the gutless U.S. Congress. Gun control advocates should take their cue from Bernie Sanders and start their own revolution.