Immigration Reform Could Haunt the GOP Right Up to 2016 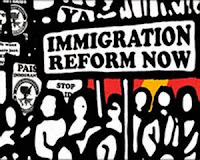 You would think Republicans would have learned by now but a GOP Texas gang of conservatives brought the lawsuit along with 25 other states that stopped President Obama's Executive order on immigration in its tracks. Obama's action that would have helped up to 4 million undocumented immigrants came to an abrupt halt due to the Republican Party. Hispanics should take note of this now and go to the polls in 2016 to vote for the party that has their best interest in mind, Democrats. Clarissa Martínez-De-Castro, deputy vice president of the National Council of La Raza, said"


“Those who continue to block commonsense relief to settle a score with the president should realize that their political gamesmanship is destroying lives and alienating an increasingly influential voting bloc, who will remember these very personal attacks on our families and our community come Election Day.”

President Obama's Executive Actions were designed to provide protection from deportation as well as granting work permits to millions of illegal immigrants. I've said this repeatedly but needs repeating now; these folks are vital to both American agriculture and for domestic purposes. What would happen in this country if there was no one to work in the fields, or in restaurants, or household care or in gardening, which these people excel in?

Hillary Clinton has taken her stance on the issue by backing full citizenship for potentially millions of undocumented immigrants. Bernie Sanders must come out quick and establish his position if he wants to be a viable candidate in this race.