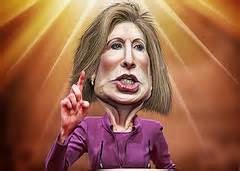 Carly Fiorina brought Hewlett Packard to the bottom of the barrel with her style of management. She laid off 34,000 workers and then another 16,000 had to be let go. After six years and signs of her faltering business methods she was fired. NOW SHE WANTS TO BE PRESIDENT AND PUT THE WHOLE COUNTRY IN THE TANK. Where does the GOP come up with these people? Oh, by the way, she was an adviser to the John McCain presidential campaign in 2008. So far, she's batting 1000. Right now her major push is anti-Hillary, as if Jeb Bush, Ted Cruz, Marco Rubio, Rand Paul, ad infinitum weren't anti-Hillary. Fiorina keeps saying, "I'm ready for Hillary," which I, and am sure millions more Americans, doubt very much. What's she's ready for is the pasture and it's time to put her there.
at May 04, 2015