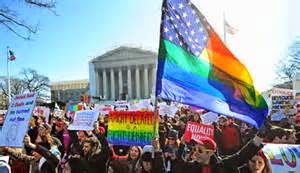 I am curious if there is any leeway in the process of a SCOTUS decision to hedge on the side of what's right? I mean if Chief Justice John Roberts leaned in favor of the gay issue once before, something must have urged him in that direction. And all of a sudden, even some anti-gun legislation that was blasphemy a few years ago has favored the gun control advocates. Plus, the feds are leaving the marijuana controversy alone for the time being. I mean, if you really want to find a loophole in the Constitution, SCOTUS is the one to do it. Gay rights should be a slam dunk though, based on the 14th Amendment. It clearly forbids "the states to restrict the basic rights of citizens or other persons." But, then, there's that Bible thing saying  "You shall not lie with a male as one lies with a female; it is an abomination." This is the conservative, radical, religious ideology that has been controlling the right of the Supreme Court for the last few years. It could be that SCOTUS senses the importance of being morally right today, as well as constitutionally correct, and their timing is right if they don't want to start a revolution
at May 03, 2015