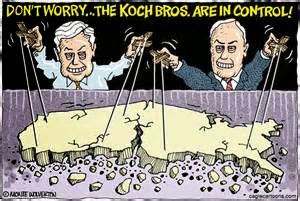 Bernie Sanders has issued a three-prong assault on the Koch Bros., who he calls the poster boys for the 1% wealthy, re. their ongoing assault against Social security. First, they want to increase the retirement age to 70. Now, let's see, would their efforts be in behalf of the SS program to help it survive? Hell no, it's to save Koch Industries billions from the 60,000 people they employ in the U.S. Put it off as long as possible and maybe some of these nice employees will die before reaching age 70. Second and third, they scream that SS is going broke and that it needs to be privatized. Again, are they coming to the aid of one of America's institutional benefits? Hell no once more. The savings and potential revenue for something like this would be enormous for Koch Industries. What is interesting about the video with this article is that it exposes many of the secret lobbying groups supported by, who else, the Koch Bros. Watch it!
at May 14, 2015