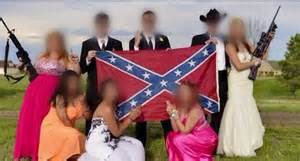 A mother of one of these dull-wits in the picture said she thinks it's just immaturity. It is this kind of apathy that spawns acts like that of James Eagan Holmes just miles from where this prom was being held when he killed 12 and injured 70 in an Aurora movie theatre. It's not funny and these young people are old enough to know that. The Confederate Flag represents defiance and the guns represent hostility and when the two are shared by a group, it can get out of hand and lead to, well, another Aurora. To begin with, if they are real, where the hell did they get the assault rifles? If it's from their dull-witted parents, then, we can probably thank the National Rifle Assn. for its demand for loose gun laws. It is one thing to be the country with the most gun deaths, it is another to be the country with the most gun nuts.
at May 07, 2015