CONGRESS NEEDS TO FUND AMTRAK OR JUNK IT 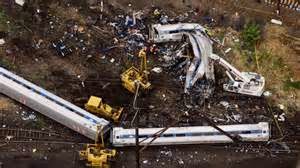 AMTRAK's crash on a curve in the Philadelphia area last Tuesday evening killed 7 and injured more than 200. It hit a curve with a speed limit of 50 at 106 MPH. The day after the crash House Republicans voted to cut AMTRAK's budget. The engineer of that train, Brandon Bostian, 32, of Queens, New York, who wouldn't talk to Philadelphia police, is drawing a blank on what happened. He took his lead from a bunch of Republican congressional numb nuts that started drawing a blank on reality when President Obama entered office. How can you know that the entire infrastructure of the AMTRAK system is near collapse and then say we're going to keep it running but not support it financially, while certainly expecting more crashes like the above? This has become typical of the way the GOP think, or better, the way they don't think. I would be very surprised if 216 doesn't clean out at least some of these blockheads.
at May 15, 2015