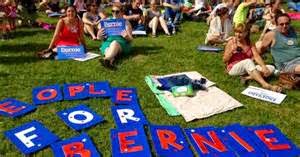 This sign says it best: "People for Bernie." They're sitting on it, the grass roots of Bernie Sanders campaign, showing their admiration and support. It all happened in Burlington, VT, but he has every intention of taking the revolution national, and it is people like these who will help him do it, eventually winning the Democratic nomination. To start the revolution he said:


“Today, with your support and the support of millions of people throughout this country, we begin a political revolution to transform our country,” he said. “This campaign is not about Bernie Sanders. It is not about Hillary Clinton. It is not about Jeb Bush or anyone else. This campaign is about the needs of the American people, and the ideas and proposals that effectively address those needs.”

The time has come for these American people to put their support where their mouth is and come out for the man who is fighting for their needs. Bernie Sanders has started cropping up repeatedly on my Facebook and Twitter pages recently, an indication that more folks are becoming aware of his presence in the race and just who he is. The latter has a direct effect on MSNBC's question of whether he can successfully take his revolution national and adds a national revolution is longer than a longshot for Sanders. But he did it once before and won the office of Mayor in Burlington, in another longshot.

One of his former staffers "...attributes Sanders’ later successes to reality catching up to Sanders’ rhetoric." The hope is now that reality will catch up with the American public and put this man of the people in the White House.
at May 28, 2015