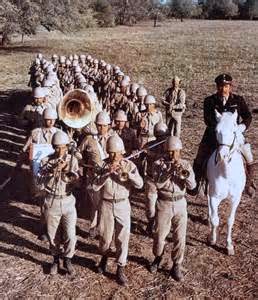 Anyone remember the movie, Viva Max, with Peter Ustinov, John Astin, Pamela Tiffin and Jonathan Winters? Ustinov, a Mexican General, along with his sidekick Astin, with soldiers march from their country to San Antonio, Texas, where they plan to retake the Alamo. It is a hilarious comedy of blunders from both countries with an eventual outcome...well, you should really see the movie. Ted Cruz, who probably doesn't even know what the Alamo is since he is actually from Canada, thinks the exercise called “Jade Helm 15” is a conspiracy against the people of Texas. The implication is the feds are holding these domestic military training exercises in Texas to implement martial law, seize Americans’ guns, and imprison political dissidents. His lunacy, along with other touched Texans, mimics the antics of Jonathan Winters in the movie, who plays a Brigadier General in the National Guard. The locals bumble through everything they do but the Mexican troops eventually return home. At least Peter Ustinov's threat was real, although a farce in the making. Ted Cruz wouldn't know a real conspiracy if it ran over him.
at May 04, 2015