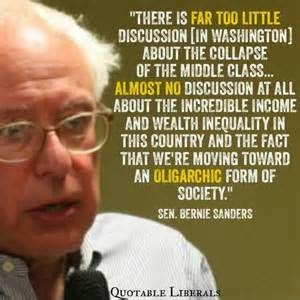 Bernie Sanders stands for the middle class and this is nothing new, it has been his mantra for the 25 years he has spent in Congress. If you're looking for consistency, Bernie is it. As the middle class has declined, the wealthy have just gotten wealthier, at the sake of the middle class and the poor. When we have corporate CEOs in this country making upwards of $300 million annually and over 600 thousand in the U.S. homeless, not to mention the 16% of the population below the poverty level, there is something very wrong. The middle class demise was accelerated by the Wall Street crash of 2008, with Sen. Sanders exclaiming that no bank should be allowed to get too big to fail.

To quote the candidate: "Today, we have more wealth and income inequality than any major country on earth. We have one of the highest childhood poverty rates and we are the only country in the industrialized world which does not guarantee health care for all. We once led the world in terms of the percentage of our people who graduated college, but we are now in 12th place. Our infrastructure, once the envy of the world, is collapsing." Wages and total income for the working public are decreasing while the rich get richer. As President, Bernie sanders would demand that Congress address these issues and you can depend on him keep driving until the job is done.
at May 07, 2015