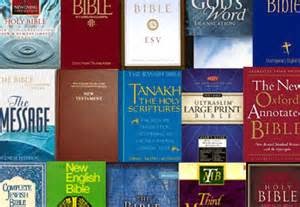 There are hundreds of translations of the Bible and I would think that would be a nightmare for devout Christians, especially fundamentalists, although they say they don't take all scriptures literally. So if they pick and choose, what does that say about the Bible as a whole? Even Jesus said, "You have heard it said...but I say to you..." The site Biblica states there are two views on how the translation should be conducted. On the one hand the "translation should stick just as closely as possible to every word of the original Hebrew and Greek." On the other it, "should transfer the message, that is, the exact thought and emotion of the original text." For those who favor the King James Version, dating back to 1611, if you tried to interpret its scriptures literally you would be a lost soul. And then there is the Apocrypha (meaning hidden), a second set of booklets that were never included in the Bible nor talked of by Jesus and the Apostles. It is full of history and can be fascinating to read.

My point here is that no matter what version of the Bible you follow, you must face up to the fact that it was written by human beings, no doubt divinely inspired, so there is always the possibility of inaccuracies. Faith is a good thing, as long as it is tempered by facts.
at May 01, 2015