Yes, the NFL made Colin Kaepernick a martyr


Colin Kaepernic is half black, half white, and his white mother doesn't approve of his kneeling for the National Anthem. He does it because of the oppression of black people and people of color, which has martyred him by NFL head Roger Goodell. Hank Aaron, who faced racial discrimination in 1974 chimed in to say he even received "death threats and hate mail," all because of the color of his skin. Kaepernick, one of the top quarterbacks in the league is still without a job, saying he did this after months of witnessing some of the civil unrest in the U.S. The last shoe hasn't fallen in this issue.

Why Colin Kaepernick did it...

Recreational marijuana: To be or not to be? 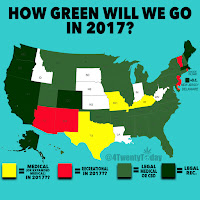 There are people who abuse alcohol, gambling, even shopping, and there will be those who abuse recreational marijuana. They tried to outlaw booze and gambling but lost, of course not shopping. All three can bankrupt you. My point is if there is a demand, a source will be found. Corona Beer just bought a minority stake in a Canadian pot company, while Rhode Island now considers legalization. It is already legal in nine states, with high use California having startup problems. The real question here is if the public can be responsible and that, of course, is questionable. It still will no doubt happen.

Corona Beer get into pot...

3 Arguments for and Against Legalizing Marijuana...
at October 31, 2017


Robert Mueller proves Russia infiltrated Trump campaign successfully using people like Paul Manafort, George Papadopoulos, (both indicted) Donald Trump Jr., Jared Kushner and others. The Oval Office lunatic and his dufus mouthpiece denied everything, trying to change subject to the Clinton campaign and the "Steele Dossier." Mueller has let all know he is serious about this probe as Trump's lawyers rush to try and stay ahead of the investigation. Sen. Mark Warner of Virginia, the top Democrat on the Senate Intelligence Committee called it, "a significant and sobering step."

Trump lawyers-What do we do next?...


The Center for Injury Research and Prevention reports 4,300 young people ages 10-24 were victims of gun violence in 2014, with accidental firearm deaths among children related to child access to firearms. That same year, 2,549 children (age 0 to 19 years) died by gunshot and an additional 13,576 were injured. A kid in Seattle brought his parent's gun to school in a backpack, dropped it shooting and almost killing another student. Homicide was the third-leading cause of death among youths 10 to 24 years old in 2014. The NRA tries to tell you otherwise but guns do kill...PERIOD!


Opened my local paper in Phoenix yesterday with its "Public Safety" column screaming gun violence. A woman was found with a gunshot wound in a West Phoenix front yard who later died. A man was found in Chandler, a Phoenix suburb, with a gunshot wound who later died. In a Phoenix home invasion a man was fatally shot with an illegal weapon. And, Tempe, another suburb, is desperate to solve a recent murder in an apartment building parking lot. Arizona is #11 in the country for gun violence with someone killed by a gun almost every day. Wanna move to Arizona?
at October 30, 2017


Sarah Sanders, the poor soul White House mouthpiece laments her squeaky-clean boss couldn't have sexually harassed all those 16 women. The Access Hollywood tape with him bragging about kissing and fondling women without their consent kind of confirms Donald Trump is a sexual pervert. Former Apprentice contestant Summer Zervos claimed Trump kissed and groped her, his ex-wife Ivanka Trump accused him of rape, plus a case in court accuses him of raping a 13-year-old girl in 1994, ending up in billionaire pedophile Jeffrey Epstein's "black book." Yeah, he's innocent okay.

Abused women keep coming out of the woodwork...

Billionaire pedophile could bring down Trump...


Only 38% of Americans approve of Donald Trump's presidency with 58% disapproving. "That rating is the lowest approval rating of any modern president at this point in his tenure, according to the pollsters." Among those decreasing were Independents and white adults without a college degree, the latter a large part of the Oval Office lunatic's base. In July, Gallup did a Trump approval rating by state going from a low of 26% (Vermont) up to a high of 60% (West Virginia). FiveThirtyEight finds most of the decline in red states with Wyoming at -26% 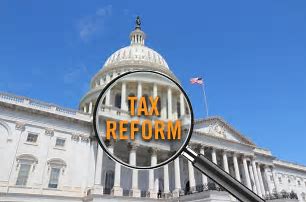 Arizona's congressman, Jeff Flake, who is fed up with Congress, says the budget is on-track for passage but Tax Reform is not certain. Democrats got their way eliminating Trump's border wall funding adding things like increasing health allocation. Also in question is how GOP will pay for the tax plan and its favoring the wealthy. And Kevin Brady's secrecy isn't helping with lobbyists having a field day. Treasury Secretary Steven Mnuchin said that it's difficult "not to give tax cuts to the wealthy," which Flake agreed with. Guess we should be glad he is going.

Jeff Flake back in the news...

GOP not sure how to pay for their Tax Reform...

Democrats got their licks in... 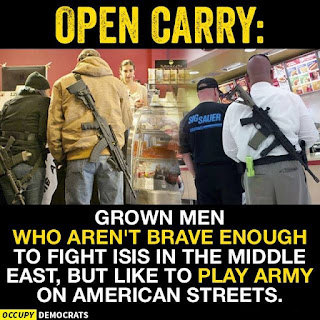 Justin Haskins says, "Strict gun control will never work in America," and "evidence clearly shows gun-control laws don’t work, and even if they did, they could never realistically be enforced nationwide." NOT TRUE! A study with data from the CDC, the NRA-ILA, and The Law Center to Prevent Gun Violence shows the average gun-related homicide rate per 100,000 people among gun control states (3.31) was lower than those with no regulation of private gun sales (4.28). The recent non-partisan National Bureau of Economic Research found 10 years after the adoption of right-to-carry laws, violent crime is estimated to be 13% 15 % higher than it would have been without the RTC law. As far as enforcement, just need to get rid of Republican control.

Tax cuts for the wealthy-Are you ready?


That's all they have left...the Republicans, I mean. After failing on the repeal of Obamacare, everything has been downhill. And the tax cuts are a must in order to hold the Party together. Rep. Peter King (R/NY) questions the fairness of the bill, and critics claim it is skewed to the wealthy and corporations with the middle-class and low income screwed. Even Republican constituents don't want it. Reuters reports that just 28% of the public support the tax plan, and USA Today says Donald Trump relies on lies to sell the tax plan, with 31% saying we would be worse off. Typical GOP.

Republican constituents don't even want it...

Is Steve Bannon runnnig for President?


Steve Bannon appears to be on a breakneck path to the White House leaving leaving Republicans in more disarray, wondering what's going on. Trump's former top adviser, a white nationalist, anti-semitist and racist, seems intent on overthrowing the GOP. Who cares about the Republicans but not with this in their place. Mitch McConnell and his gang have declared open warfare on Bannon with a year before the 2018 elections. Right-wing billionaire Robert Mercer is Bannon's banker and the scary part of all this is many of Trump's supporters are also behind Bannon.

More about the white nationalist who would be President...
at October 28, 2017

Can Arizona elect a Senate Democrat to replace Jeff Flake?


Arizona's GOP thinks the Exit of Jeff Flake from the Senate gives them a chance to hold on to the seat. His popularity had dropped to 18% and was expected to lose against contender Kelli Ward in the primary. There are numerous potential candidates (see links below) that may plan to go up against Ward who tried to outlaw enforcement of federal gun laws in Arizona, and is a Tea Party insurgent. Being from Arizona and closely following the politics here, my gut tells me that state Progressives are ready to take up the mantle, elect Kyrsten Sinema and start turning Arizona blue.


Sarah Sanders, clueless mouthpiece of the Oval Office lunatic, made the statement in last Wednesday's press briefing that Donald Trump's first nine months had out performed Barack Obama's entire presidency. The accomplishments she pointed to were mostly ludicrous with the usual distortion of the truth. Like 1.7 million jobs added in that period when the latest data reveals only 1.33 million, projecting that 2017 will end short of prior years. The insecurity of this man is so obvious by always comparing with Obama and taking credit for his accomplishments. Pathetic!

The distortion of a sick presidency by Sarah Sanders

How could Adam Lanza's mother not have recognized his abnormalities?


Adam Lanza did not just snap in the killing of 20 young children in the 2012 Sandy Hook School gun massacre. He planned it for a year while fascinated with past shootings, having "many similar characteristics and behaviors with other active shooters." He was attracted to young children implying pedophilia, he "was obsessed with firearms, death and mass shootings," and his mother, Nancy Lanza, whom he killed, was concerned about a month before the shootings when he became a shut-in, covering his room windows with black plastic. Good God, what does it take?

We should have known about Newtown shooter...


Republicans, led by a clueless and maniacal oval office, is determined to eliminate every right to justice the American consumer has. The latest is the Senate killing their right to band together to sue their banks. A class-action suit like this is the only way consumers have of protecting their rights, with banks too powerful for the individual to go up against, and much too costly. This is just another example of the GOP favoring the corporate sector over the average American. I wonder now about those Trump supporters who are middle class and under. Are you blind or just dumb?


Consumers no longer can sue banks...

Sen. Elizabeth Warren on why you should be upset...


Not only is Trump dumber than rocks, confirmed by many of his college professors, but he also displayed his sophomoric side in the back and forth bickering with Sgt. La David Johnson's wife, Myeshia Johnson over whether he knew her husband's name. Johnson is one of the four killed in Niger. She commented how Trump stumbled to recall the name, and that rightfully made her sad. Made worse when the Oval Office lunatic claims he has the best memory in the world. Johnson also completely confirms the statement of Florida Congress woman Frederica Wilson, D-Fla. And a clueless Congress just sits.
at October 25, 2017 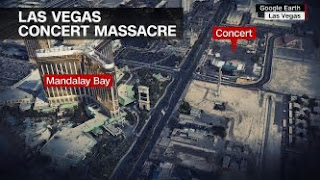 What is it about the citizenry of the U.S. that can overlook a gun massacre like the one in Las Vegas and not come rushing to the steps of the Capitol to demand that a clueless Congress do something about it? Screw the NRA! It's a terrible thing to say but maybe these staunch gun nuts should experience a similar event involving them and their families. Then they would see the horror of what they have protected over the years. From Sandy Hook to Las Vegas, none of these gun violence tragedies has done anything to significantly change the public's mind about controlling guns.

Cub Scout kicked out of den for advocating gun control...


I have never thought Jeff Flake contributed to the U.S. Senate, nor to politics at all, even in the House. But today I did some solid research and uncovered this. In 2006, three out of five mayors in his home district opposed his re-election because, according to Flake, he did not "bring pork barrel spending" to the mayors' cities. In his swan song (leaving end of this term) he lambasted Trump's reckless, outrageous, and undignified behavior, joining Tennessee's Bob Corker who is also leaving the senate. However, he did not once use Trump's name.


SEE: Trump's critique of Trump, impeaching him for divisiveness,moral bankruptcy, and lack of leadership...

SEE: Corker Trump at each others throats...