Where Bernie Sanders Stands on the Issues-Women's Rights 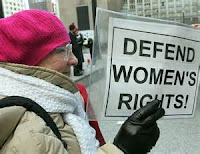 Any candidate who expects to be President cannot do it without some help from the female vote. Barack Obama won the women's vote by 12 percentage points in 2012 against Mitt Romney. A recent Gallup Poll gave Hillary Clinton a 56% favorability rating with women. Although I cannot find a poll indicating Bernie Sanders' support by women, below are his stands/votes on women's issues:

But conservative has-been William Kristol resurrected an ages-old piece Sanders wrote intended to attack gender stereotypes of the 1970s which has been blown completely out of perspective since he announced his running. His "campaign spokesman Michael Briggs said it was a 'dumb attempt at dark satire in an alternative publication' that 'in no way reflects his views or record on women.'" Salon goes on to say:
Bernie Sanders clearly respects women's rights and deserves the female vote.
at May 31, 2015