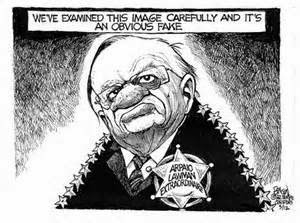 Arizona is the worst run state in the country. It treats its Hispanic population like crap, has the loosest gun laws in the U.S., extremely low educational standards and completely ignores its battered children, to name only a few flaws. The recent outgoing governor Jan Brewer was twice selected as America's lousiest in that job. And then there is Sheriff Joe Arpaio. In a recent Arizona Republic article it was reported that despite current federal contempt-of-court proceedings against him, delusional Arizona supporters continue sending money to his reelection campaign. $5.5 million in the last two years. Do they know something that we don't or are they just more of the stupid Arizona voters? I think it's the later.  At the time of this deluge of dollars the Sheriff is being held in contempt of court for ordering his deputies to harass Hispanics...just because they are Hispanic. He was ordered not to do this by a federal court.

There are 16 hate groups in Arizona as documented on this So. Poverty Law Center map. You have to wonder if one of those clusters might be the ones who are funneling so much money to the man known for persecuting Hispanics.
at May 06, 2015