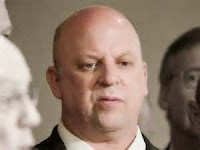 It's okay for my dumb constituents but not for me. That's how Tenn. Republican Representative Scott DesJarlais characterized his position on abortion. This yokel was one of 242 in his party to vote for a proposed 20-week abortion ban that has become one of the top priorities for the current GOP-controlled Congress. But ThinkProgress reports that DesJarlais "has advocated for at least three legal abortions in his personal life." He supported his ex-wife’s decision to legally end two pregnancies and then pressured his 24-year-old mistress to abort her pregnancy she claims was his child. A researcher reported that many will oppose abortion for years then terminate their own unwanted pregnancy. One of his subjects once told him, “Most pro-life women oppose abortion with four exceptions: rape, incest, the life of the mother, and me.” But Scott DesJarlais is simply a con artist posing as a U.S. Representative. Pathetic!
at May 21, 2015