Bernie Sanders Can Win Because He Is Authentic 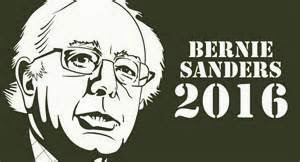 Bernie Sanders is as real and genuine as it gets but will that land him the Democratic nomination for 2016? CNN is still saying don't count Bernie out, even though he faces enormous popularity and financial odds against Hillary Clinton. I did the numbers once, 30 million Progressives and another 40 million Democrats, not necessarily Progressives. Sanders can't count on all 30 million Progressives and he can count on taking some of "Hillary's" 40 million Democrats. And throw in a few thousand moderate Republicans making the pot pretty massive for someone. Bernie Sanders' biggest problem is that in a recent poll, only 1% of voters haven't heard of Hillary Clinton. And In a late Clear Politics national poll Clinton has 62 percent support from Democratic voters, Sanders only 5.6 percent. He also can't expect a lot of establishment endorsement since he is an outsider doing his own thing. But that is what the grass-roots folks love and why so many of them love Bernie.

There are reasons for the candidate's growing popularity, primarily his "frontal assault on the political system and a pledge to directly combat the billionaire class.” Also, with the level of distrust in Washington at its peak, things are ripe for Sanders' damn-the-system revolution. Bernie Sanders has Jimmy Carter's "Peanut Farmer" appeal but with more substantive issues in his playbook.
at May 27, 2015