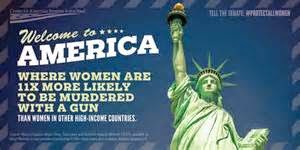 All we hear from the gun nuts is, if you put more guns on the street, deaths will go down. Well Arizona has done that with their loose gun laws and the state's rate of intimate-partner gun murders was 45 percent higher than the national average from 2009 through 2013. Of course we do not know exactly how many guns are in Arizona, thanks to the National Rifle Assn., but apparently enough to kill 94 women in the above period. Once again the gun nuts scream we have enough laws but they didn't stop 12 of the shooters from obtaining a gun and killing his spouse or girlfriend. In addition, "41 percent of the shooters had a previous arrest or conviction or had been under an order of protection at one time." There's more, Arizona has 14.9 firearms deaths per 100,000 population, more than California, 7.97, New York, 5.1, the latter two with much more stringent gun laws. Some of this is due to protective orders that are not enforced.

"Part of the problem is that nearly 40 percent of the protection orders issued by Arizona judges in 2013 and 2014 were never entered into the National Crime Information Center," reported Andrew LeFevre, a spokesman for the Arizona Criminal Justice Commission. Police departments are remiss, not only in Arizona, but all over the country for not entering important data that could save lives. This is compounded by a patchwork system in sharing what data is available. But the primary problem here is guns in the wrong hands and the only way to solve that is more responsible gun laws...like background checks.
at May 13, 2015