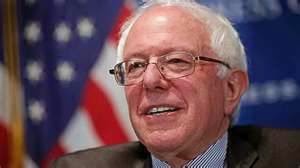 Presidential contender Bernie Sanders says he neither needs nor wants the tainted money that comes from billionaire donors like the Koch Bros. I believe him, and here's why. In a post yesterday, we uncovered some 30-million potential Progressives in this country. There are another 40-million Democrats, not necessarily Progressive, but most of whom don't want to see another Republican president. If you hit all 70-million for $5.00 twice, that's more than Barack Obama spent on reelection in 2012. For those of you who question my numbers, sure, all 70-mil won't give but with $5.00 as a standard, the range could be anywhere from $1.00 to $100 or more and the total amount could be even higher. Sen. Sanders actual words about the issue were, "Frankly, it is vulgar to me that we're having a war of billionaires." This is the kind of statement Progressives have been looking for for years. Now that you have it, run with it.
at May 03, 2015