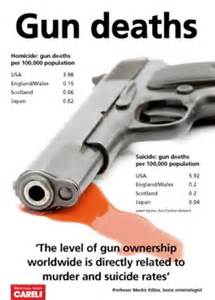 Gun deaths are up across the country, significantly in some states. Nationwide they are up 12% but Maine had the highest increase of 93%. The analysis was done by the Atlanta Journal-Constitution researching through government statistics, insurance industry data and reports from state vital-records agencies over the past decade. Five states had fewer gun deaths: The District of Columbia, California, New York, Maryland and Illinois. All five states have pretty strict gun control laws. Here are some more interesting figures:

It is fair to conclude from these figures that stronger gun control laws prevent gun violence. Not all of it, but one life saved is worth the passing of the legislation.