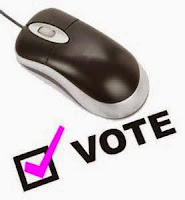 At first there was an agreement that online voting was a good thing for both parties until...Republicans did their research. Now they're getting cold feet; Florida is backing out due to "outlandish claims opposing an online registration measure." Texas GOP lawmakers are afraid of fraud; this coming from the party of fraud. But Pew Research found "that 22 states plus the District of Columbia, representing more than half of all eligible voters, will offer the chance to register online for the 2016 election." The hard facts are that blacks and Hispanics, traditionally voting democrat, have more computers and smart phones than they have in the past. Today, 80% of blacks are internet users compared to 83% of Hispanics. It has become clear that Republicans will fight any form of voting that does not favor their party and that illustrates the desperation of the GOP for votes.
at May 16, 2015