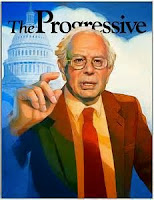 Bernie Sanders is The Progressive and President Barack Obama is doing everything in his power to pave the way for a winning economy for the Progressives in 2016. By the way, what happened to all the nay-sayers who said Obama would bring the country to Armageddon? Notables like John Boehner and Mitch McConnell plus a lot more of their GOP numbnuts. The U.S. added 223,000 jobs in April, unemployment fell to 5.4%. It was 7% when Obama took office. There isn't the shadow of a doubt that Republicans had no hand in this improvement, if anything, they have fought tooth and nail everything this administration tried to do. And yet it has survived and prospered. The stock market is making gains and wages are finally on the upswing. Obama said: "If you are persistent you'll get it. If you are consistent you'll keep it." It's now time for Bernie Sanders to take up the mantle.
at May 11, 2015