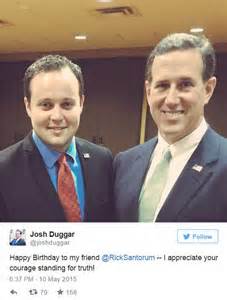 He said...He said, both Republicans caught up in a battle that the GOP richly deserves based on their stringent conservative standards for family values. In an earlier post I pointed out that a lot of their leaders are sure palsy with the Duggars. Josh Duggar has admitted to molesting five girls when he was younger, four reportedly his own sisters. Okay, the guy made a huge mistake and has probably already experienced  plenty of retribution, but the family's close connection with the Republican Party should be explained, particularly all the GOP Presidential candidates that consider the Duggar family close allies.

If you represent such a high standard of family values, shouldn't you know something about what these friends are doing? A story by In Touch exposed what had happened way back in 2006, and it was at that time that Jim Bob Duggar consulted an Arkansas State Trooper named Joseph Hutchens who talked to Josh but later said he was told only about one incident of molestation. It went no further. The police than halted their investigation in 2006 because the statute of limitations ran out. Hutchens is now serving 56 years in prison for child pornography.

It all comes down to living the life you preach to others or risk being brought down by the truth if you don't.