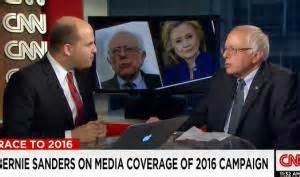 Presidential candidate Bernie Sanders talked to host Brian Stelter on CNN's Reliable Sources this past Sunday. The subject was Sander's criticism of the media for covering everything in the 2016 election but the issues and concentrating on negative campaigning. The comparison was drawn between how celebrity scandals came to the news desk cheap and produced great ratings resulting in the same mentality in presidential races. Sanders said:


"The majority of American news consumers are either misinformed or underinformed. There is a lack of basic current events knowledge in our society. Most people get their news from television, and television has decided not to cover serious issues."

Stelter noted that "Bernie Sanders is one of the few we've seen consistently speaking out on the topic..." Here's his actual comment on the air:


"It's rare to hear a candidate or any politician really talk about the systemic issues in the press the way you did last week. I kind of lit up when I heard it, and I wondered, is it a winning strategy for you to be going at the press?"

Sanders replied that he didn't know if it was a winning strategy but it was what he did, followed by another listing of the issues. This is all in comparison with the other candidates, Republican and Democrat, constantly beating around the bush and never addressing the issue. But the American public buys this and it is pathetic!
at May 26, 2015