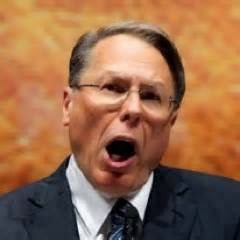 The "Mouth," AKA Wayne LaPierre, head of the National Rifle Assn., was caught with his hand in the black powder. I first blogged on this the end of April. Josh Horwitz, Executive Director, Coalition to Stop Gun Violence, reports that the NRA admits doing it but blames it on the fact that it was "Convenient, unexplained 'coding and clerical errors.'" Only Wacky Wayne would think he could get away with this and it's possible that he will unless a gutless Congress finds some balls. Now this is the man who weaseled out of going to the Vietnam War by getting his family physician to claim he had a nervous disorder. That could account for some of the incredibly imbecilic things he has done in the last few years.

Here are the charges:

CSGV is pressing for a full investigation by the FEC and IRS and need your help with their efforts.
at May 15, 2015