PARODY: DeJoy decides to get even with accusers

This week marks a change of format in Nasty Jack posts featuring parody to illustrate just how hilarious and absurd the political scene can be. Enjoy! 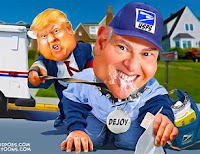 Louis DeJoy was seen lurking around Washington, D.C.'s main post office late one evening with a Molotov cocktail in one hand and a pipe bomb in the other. DeJoy was sure Joe Biden was going to take away his job, a job bestowed on him by his buddy, Donald Trump, and he knew his work wasn't done.

He looked at the historic building erected in 1839 with
dismantled sorting machines lined up in the lobby. "Perfect," he said while opening the front door, proceeding inside but unexpectedly facing the 80 House Democrats calling for his ouster. The Dems took away DeJoys' toys and gave him a one-way ticket to Mar-a-Lago.