Simple minded continue to anoint the king of lunacy 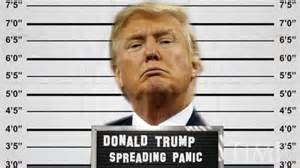 Yes, now Donald Trump has risen even higher in the polls, supported by the dull witted gang that astonishes most Americans and draws laughter from the rest of the world. These followers even amaze the few rational conservatives that are out there. There is nothing good to be said about Trump but one thing is sure, he is an arrogant bully that has captured some poor souls that probably shouldn't be voting anyway.

How many Republicans predicted the man would go down in flames before the end of the year? Well, these prognosticators did not count on an American voting public that has become more out of touch than ever before. They're desperate and it is because the GOP doesn't have one candidate that is even remotely qualified to be President of the United States. A new survey places Trump’s support at 38 percent among registered Republicans and GOP-leaning independents. That's downright obscene.

But there is a way out. VOTE FOR BERNIE SANDERS.