George W. Bush was not a legitimately elected President in 2000 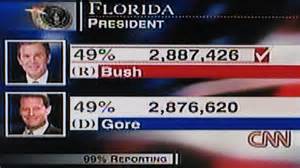 Florida laws under the supervision of Sec. of State Katherine Harris, and supported by then Governor Jeb Bush, wrongly disenfranchised thousands of otherwise eligible voters that eventually swayed the election in favor of George W. Bush. The 2000 election led the way for other states controlled by Republicans to pick up on the illegal tactics used in Florida and prevent valid Democratic voters from going to the polls all over the country. An excellent article here from The Nation.
at December 02, 2015