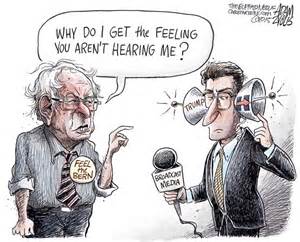 I did another blog post today, "New take on why Bernie Sanders will be President," and the facts there are supported by the Media Matters report that reflects a huge disparity for Bernie Sanders in the coverage given the Presidential candidates. Donald Trump received 234 minutes of air time from the first of January though the end of November, compared to 10 air time minutes for Bernie Sanders. I worked in television news and know that you always go with the stories that will provide the highest ratings. But the very fact that Trump beats Bernie Sanders in news coverage is worse than pathetic.

What even worse is that "Republican Jeb Bush received 56 minutes of coverage, followed by Ben Carson's 54 minutes and Marco Rubio's 22," and they aren't close to being the contender that Bernie Sanders is. And yet another shocker, ABC News has devoted only 261 minutes to campaign coverage with only one of those minutes going for Bernie Sanders. Media Matters says, "Sanders got virtually ignored by ABC because there was a conscious decision to do so."

With these kinds of odds against him, can you imagine the smile on Bernie's and Jane's faces after he is elected President and they walk into the White House?