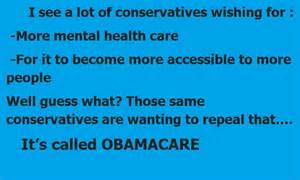 "Obamacare has been a huge help for mental health care," according to Alan B. Miller, CEO and Chairman of Universal Health Services. "This year, an estimated 3.7 million Americans with significant mental illnesses now have coverage and access to care through the insurance exchanges or extended Medicaid — they have moved from the shadows and into needed treatment." A sign that something is being done about this problem as has been demanded by the NRA and other gun rights organizations and supporters.

It's now time for these same people to come to grips with and support responsible gun legislation like background checks, banning assault weapons, closing the gun show loophole and halting gun straw purchases. Time to put your common sense to where your mouth is.
at December 03, 2015