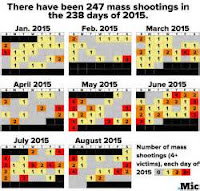 The United States represents only 5% of the global population but accounts for 31% of all mass shootings. With more mass shootings than days in the calendar to date, we will end 2015 admitting to the rest of the world that its supposedly most civilized country is actually run by a bunch of thugs who are gun nuts.
at December 03, 2015

Animals to Humans: All we want is to live

When you look at a kitten or a puppy and its cuteness just makes you melt, it can also make your day. But what about their day...and futur...