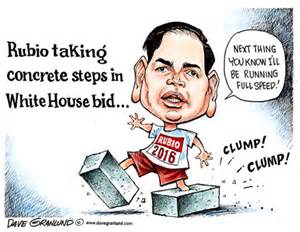 Yes, this would be Marco Rubio, who has repeatedly tried to sabotage the Affordable Care Act, yet is insured with his family under the program. He even "benefits from a taxpayer-funded subsidy offered only to members of Congress and their staff valued at $10,000, far greater than the subsidies offered to most Americans who purchase insurance on the exchanges." And he's not alone. Other phonies in the GOP who are covered by Obamacare include, Sen. Rand Paul and Ted Cruz. It's bad enough to seek coverage under a program you have fought hard to repeal but taking a subsidy of $10,000 on the backs of tax paying Americans, including his own Florida constituents, is downright obscene.
at December 11, 2015