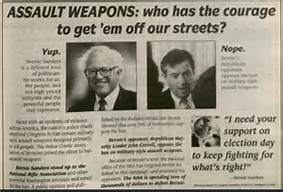 This is what Bernie Sanders wants to do about gun control:

1. We can expand background checks to keep guns out of the hands of criminals and the dangerously mentally ill. This is an idea that over 80% of Americans agree with, even a majority of gun owners.2. & 3. We can renew the assault weapons ban and end the sale of high capacity magazines — military-style tools created for the purpose of killing people as efficiently as possible.4. Since 2004, over 2,000 people on the FBI’s terrorist watch list have legally purchased guns in the United States. Let’s close the “terror gap” and make sure known foreign and domestic terrorists are included on prohibited purchaser lists.5. We can close loopholes in our laws that allow perpetrators of stalking and dating violence to buy guns. In the United States, the intended targets of a majority of our mass shootings are intimate partners or family members, and over 60% of victims are women and children. Indeed, a woman is five times more likely to die in a domestic violence incident when a gun is present.6. We should close the loophole that allows prohibited purchasers to buy a gun without a completed background check after a three-day waiting period expires. Earlier this year, Dylann Roof shot and killed nine of our fellow Americans while they prayed in a historic church, simply because of the color of their skin. This act of terror was possible because of loopholes in our background check laws. Congress should act to ensure the standard for ALL gun purchases is a completed background check. No check — no sale.7. It’s time to pass federal gun trafficking laws. I support Kirsten Gillibrand’s Hadiya Pendleton and Nyasia Pryear-Yard Gun Trafficking & Crime Prevention Act of 2015, which would “make gun trafficking a federal crime and provide tools to law enforcement to get illegal guns off the streets and away from criminal networks and street gangs.”8. It’s time to strengthen penalties for straw purchasers who buy guns from licensed dealers on behalf of a prohibited purchaser.9. We must authorize resources for the Centers for Disease Control and Prevention to study and research the causes and effects of gun violence in the United States of America.10. According to the Centers for Disease Control and Prevention, there are over 21,000 firearm suicides every year in the United States. It’s time we expand and improve our mental health capabilities in this country so that people who need care can get care when they need it, regardless of their level of income.