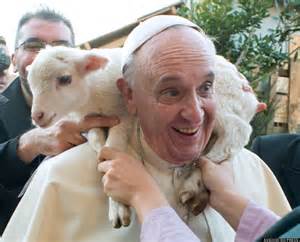 For once we have a Pope that has become the  People's Pope of the world. For the first time all faiths look upon this man as a great religious leader because he speaks not just for the Catholics but all the human race, and animals as well, everywhere. I am not a Catholic, not even a Christian, but an Agnostic that literally hangs on every word Pope Francis says. I don't always agree with him, but I know what he is saying is sincere and from the heart. He will go down in history as a great leader but that is for later.

An MSNBC article lists Pope Francis as a different kind of Pope because of a broadened horizon where he stood up for equal pay for women, forgiveness for women who have received abortions, and couples that have been divorced or remarried. He's even been on the back of world leaders to do something about climate change before it is too late. While he he hasn't accepted same-sex marriage, one point I disagree with him on, he has at least tried to understand the problems of the LGBT community by working and talking with them. The Pope attended a luncheon for the homeless in New York, which is what we call getting down in the trenches.

He has tried to give those imprisoned hope and he has met with abuse victims of the Catholic Church. In other words, this man has managed to spread himself thin over the problems of the world but maintaining the importance of every issue. I am not a religious person but Pope Francis seems to bring out the best in me every time I hear him speak or read about his achievements.
at December 28, 2015

Email ThisBlogThis!Share to TwitterShare to FacebookShare to Pinterest
Labels: Catholics, equal pay for women, forgiveness for couples that have been divorced or remarried, forgiveness for women who have received abortions, Pope Francis, Same-sex marriage
Newer Post Older Post Home