New take on why Bernie Sanders will be President 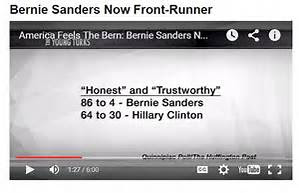 A new poll in November says that 60% of the American public thinks Hillary Clinton is untrustworthy and dishonest. That's one hell of a majority going into the first primaries in a couple of months. The Inquisitr says, "Historically, Americans have never once elected a president found in reliable polls to be considered 'not honest and trustworthy.'” The Huffington Post said, “Mainstream pundits and public relations executives work tirelessly to make you believe Clinton is inevitability.” CNN says, "The nation’s leading Democratic PR firm will soon be owned by a private equity group run by a longtime Clinton insider.”

Here's a shocker from the Washington Blog, "Clinton is deemed less trustworthy than Donald Trump, which is a remarkably (sp) achievement." Another quote from the WB, "The real interesting part of the latest Quinnipiac University National Poll, is not the fact that 60% of Americans think Hillary Clinton is dishonest, but that 40% of Americans don’t." This only a few of the detracting remarks about Hillary but you can read more on the Washington Blog site.

And none of this comes from the Bernie Sanders campaign, which has professed they want to keep the race as clean as possible from dirty politics. And in all fairness, Hillary Clinton has strived to do the same. I would have voted for Hillary but Bernie Sanders came along this man's political philosophy, his consistent positions and record in general are too good to pass up. Vote for Bernie.