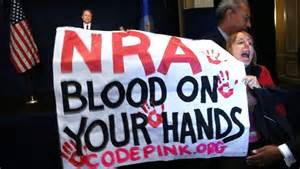 Republicans, commandeered by the NRA, are blocking a bill (The Denying Firearms and Explosives to Dangerous Terrorists Act of 2015) that would prevent "known and suspected" terrorists from buying weapons. Can you believe that? Think about the fact that were the GOP/NRA not against responsible gun legislation, the San Bernardino killing might not have happened. Get this:


"The nonpartisan Government Accountability Office recently released a report showing that from 2004 to 2014, people on terrorism watch lists successfully purchased guns no fewer than 2,043 times."

Even more: "There are 700,000 people on the terrorist watch list, and when these people tried to legally purchase guns, they had a success rate of 91%."

The NRA's creed remains...the right to guns is more important than human life.