Camping out at the National Rifle Assn. 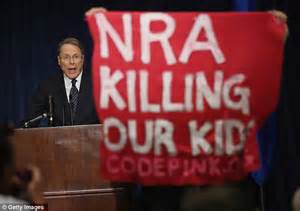 When I was growing up it was fun to camp out and experience the out-of-doors like it is supposed to be. You'd cook your own food and be responsible for the campsite and sleeping quarters, which included a tent or maybe a hammock out in the open. Times were simpler then. You didn't have to worry about being surprised by some gun nut, perhaps a domestic terrorist, hell-bent on killing as many people he or she can just because they have a gun in their hand and can. You were the target for only God knows why.

Well, there was a group camping out yesterday but it's not in the woods. The gathering is in front of the headquarters of the National Rifle Assn. in Fairfax, Virginia, in front of the building that shelters NRA head, Wayne LaPierre, and his bone headed minions. With the amount of blood on their hands, one can understand why they hide behind closed doors. The gun advocate group comes here every month on the 14th, in honor of the Sandy Hook gun massacre that killed 20 first graders and 6 adults.

CNN reports, "They've braved pouring rain, near-blizzard conditions and sweltering heat. They are Americans fed up with the NRA's agenda, sick of what they say is the group's devotion to gunmakers." There are a lot of those folks around today but a clueless and gutless Congress is only listening to the NRA and the money that jingles each election cycle. But I've heard, from more than one source, that many of these politicos could be sorry come November of 2016.