FDR was a Democratic Socialist 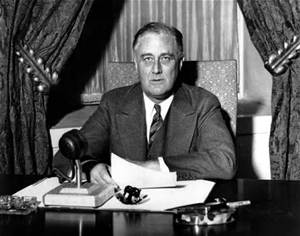 In case you don't know, or didn't remember, Franklin Delano Roosevelt was a Democratic Socialist and served an unprecedented four terms in office. Bernie Sanders is a Democratic Socialist but only wants to serve two terms as President. That's what the law says now, and it is probably as good for the person in office as it is for the American people. It is interesting how Presidents age while serving, most evident by their hair turning grey during their tenure. Bernie Sanders doesn't have to worry about that.

In a Politico article, it reported that "...Roosevelt implemented a series of programs that put millions of people back to work, took them out of poverty, and restored our faith in government." Sanders added, "He transformed the country, and that is what we have to do today." Do you see the parallels between the political philosophy of these two men. Each is for the working man, the impoverished and the middle class.

“And, by the way, almost everything he proposed, almost every program, every idea, was called ’socialist,'" Bernie proudly exclaims. It is obvious that Bernie Sanders has removed the tarnish from the once forbidden "S" word, and transformed its meaning so that, even back in 2010, a Gallup Poll found that 36% of Americans have a positive image of socialism.

So, those of you out there that are old enough to remember or who have studied FDR and think Sanders can't win because he is a Democratic Socialist, think again.
at December 30, 2015