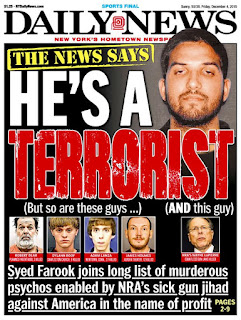 The gutsy NY Daily news, a conservative newspaper, has taken up the charge against the NRA and its irresponsible blocking of any kind of gun legislation. If we had more newspapers like this throughout the U.S. we might have prevented some of the 309 mass shootings so far in just 2015. One of the reactions from the NYDN earlier front page, “God Isn’t Fixing This,” was from the Fox News anchor idiot Elizabeth Hasselbeck who said,  "if you think prayer is less effective than gun control laws 'you’re lining up with the terrorists.'” It is this kind of garbage spewed from the Faux News Network that helps urge these fanatical terrorists on.

Here's another example of the New York News support of gun control with their past front page spreads: 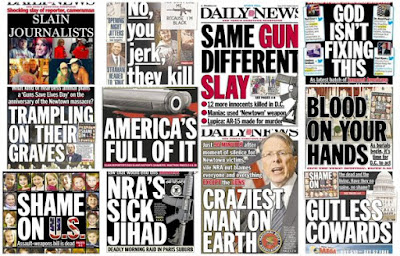