Get rid of the Congressional gun whores 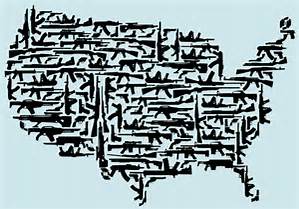 When 82% of the guns purchased for mass shootings since 1982 are legal, you know you have a problem. The question is posed in an MSNBC article by Elizabeth Chuck, of just how preventable gun violence is under current gun laws? The gun rights advocates have been screaming for years, backed by the leading gun nut, the NRA's head Wayne LaPierre, that more guns means less violence. Well it ain't happened and it ain't going to. Until we pass new reasonable gun legislation. But that won't happen as long as the Congressional gun whores have their way.

It would be nice if we did not have to wait for 2016 or 2018 elections and start a recall process for those in Congress (House and Senate) that are in a strangulation hold of the National Rifle Assn. But unfortunately there is no way to do this for there is no means set forth to do so in the Constitution. But there are names available of who the Congressional gun whores are, some even rated by how much money they have taken from the NRA. I will be posting these names starting on Monday. If you spot your Congress person, write it down and put it away for next November and in the future.