Wingnut new Kentucky Governor will bring state down like Kansas 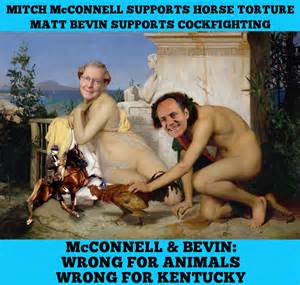 With an approval rating of 18%, Kansas Governor Sam Brownback has joined the pitiful state he has brought Kansas to. As an example Kansas has a 2015 deficit of $600 million. It was accomplished by drastically cutting taxes, making education one of the biggest losers. Just another example of a dimwit conservative who thinks the answer to everything is making the rich richer with tax cuts.

Well, monkey see, monkey do. In Kentucky where Tea Party candidate, Matt Bevin, was elected Governor in November, and promptly lowered the  Minimum Wage By $3, while revoking Voting Rights For 140,000 Kentuckians. It is yet another case of a wacky TPer going off the deep end pursuing ideology just to satisfy a bunch of double-digit IQs. What has happened to this country that someone who obviously hasn't the slightest idea of what the hell he is doing can be elected to head up a state?

Tea Party support has dropped to its lowest level ever, with only 17% backing the organization. Sorta in the category of John Brownback, also a Tea Party loser. The LA Times did a 2014 article about Brownback that says it all: "How Tea Party tax cuts are turning Kansas into a smoking ruin." It's only a matter of time until Kentucky duplicates the Kansas "success."