What the Founding Fathers really meant in the 2nd Amendment 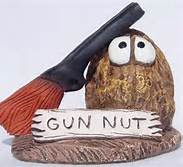 It occurred to me recently that enough hasn't been said recently about the intentions of the Founding Fathers in the Constitution for the rights and restrictions of gun owners. With individual and mass killings by guns a regular daily occurrence, and the fact that even in light of the horrific number of deaths, including many children, the National Rifle Assn. (NRA) headed up by Wayne LaPierre, still maintain that the right to have a gun is more important than human life. LaPierre bases that right on the 2nd Amendment, given to us by the Founding Fathers. He claims it is inviolable.

Here's an incident of the typical thinking of a gun nut: In a tirade against CNN’s Piers Morgan, Alex Jones argued, “The Second Amendment isn’t there for duck hunting. It’s there to protect us from tyrannical government.” Like this government could ever come together long enough to start anything, much less tyranny. It's a laughable argument and there's much in history to disprove the gun nuts. Truth-Out.org also reports first-hand documents from 1789 detail the First Congress' debate on arms and militia detail a constant theme: "the 2nd Amendment was created to protect the American government."

It wasn't meant to give some doofus the right to carry around an assault rifle in public, or even have one in the home. This also applies to handguns when it comes to open or concealed carry permits for nothing more than playing cowboy.

Here'a another point from TO.org,  "As a member of a National Guard militia, the 2nd Amendment is more of a civic duty than a personal right. Again, it was all about defense of the state – not defense against the state."


In fact, during that first gun debate, the state of New Hampshire introduced an amendment that gave the government permission to confiscate guns when citizens “are or have been in Actual Rebellion.” To those early legislators in New Hampshire, the right to bear arms stops as soon as those arms are taken up against our "we the people" government.

Gun nuts like Alex Jones are what have turned the United states into the most gun violent country in all the industrialized nations. His thinking, along with the gun nuts at the NRA, especially Wayne laPierre, is what has caused the recent blood baths that are killing innocent people, especially children.