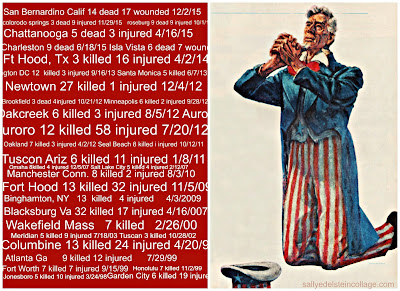 As we end the year today, it is tragic that we have to reflect back on Christmas day 2015, with a statistic showing that 27 Americans were shot and killed on December 25, and 63 injured in shooting incidents. The Washington Post uses a comparison between the U.S. and the countries of Austria, New Zealand, Norway, Slovenia, Estonia, Bermuda, Hong Kong and Iceland, combined, that had only 27 gun deaths all year long. And the reason for this is the number of guns on the street.

As an example, Hong Kong has 0.03 gun deaths per 100,000 population compared to the United States, 10.64, the U.S 354 times more. Again based on better gun control. In Hong Kong gun ownership is tightly controlled and possession is mainly in the hands of law enforcement, the military, and private security firms. You might assume, based on this, that the United States cares less about the lives of its citizens than it does about the right to possess a gun.

And I think that would be right, based on the fact that the general population--the ones being slaughtered--support less gun control. Go figure? But the tables are turning. There is a certain faction out there that has had enough and they are speaking up, making it known that Wayne LaPierre and his National Rifle Assn. control of Congress is no longer acceptable. That daily gun deaths will not become the norm. And that new, reasonable gun control will become real, even if by Executive Order of the President.