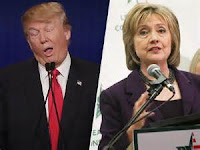 The public is downright scared of Donald Trump's nomination and also to a degree of Hillary Clinton. The former I can understand but Clinton certainly isn't in the same category as the deranged Donald. Hillary has had skeptics from the beginning, and somewhat of a problem with trust, but she still leads in the polls, over even her Republican opposition.

However, Bernie Sanders' campaign has strengthened by leaps and bounds and has cut Hillary's lead recently. There is nothing in Bernie's background that
would strike fear in voters and here is a candidate who has been consistent in his agenda for 40 years. His foreign policy chops were made in his last 8 years in the Senate. Bernie just happens to think the USA should take at least some priority but is ready to face terrorism full head on. Check him out and make up your mind.
at December 11, 2015