71% of Americans have given up on stopping gun violence 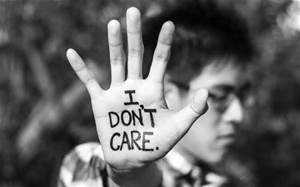 The shocker isn't that 71% of Americans have given up on Gun violence but that they think it is now a permanent part of American life. I trust this group has never had a case where a family member was shot and killed by some lunatic with a handgun or assault weapon. I call these people apathetics, those who don't seem to care about things until it affects them. And then they scream the loudest for help or justice or whatever.

Apathetics are pathetic, and one of the reasons politics in the U.S. is in the state it is in. The idiots in Congress know that a large majority of the country doesn't give a shit, so they do as they damn please. Many of them probably don't vote, and if they did, it would probably be in an uninformed way. Many of these people are successful in everything from the business world to the arts. So what the hell is going on?

The millennial "me" generation rubbed off on the rest of us and apparently lurks within at least 71% of this nation, whether it is recognized or not. Me, me, me,me,me means that I don't have to really care if kids are slaughtered by a gunman at some school, unless, of course, it is the school where my kid goes. Like I said before, you are pathetic, and this country will continue in the direction it is going unless you change this attitude.