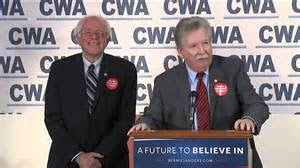 In June of this year Hillary Clinton told fast-food workers "she supported their push for $15 minimum wage." However, just recently she endorsed a $12 minimum wage. Bernie Sanders has backed the $15 figure from the beginning of his campaign so why have many unions endorsed Clinton? Bernie's latest union endorsement is from the Communications Worker of America, earlier National Nurses United and the U.S. Postal Union. The question is whether the Clinton backing came from union management or the membership.

In the case of the International Association of Machinists and Aerospace Workers (IAM), at least 1,700 member disagreed with the Clinton endorsement. And here's a quote from Bianca Cunningham, former Verizon worker "who alleges she was fired in retaliation for her union organizing in Brooklyn storefronts:"

One naysayer quipped that the reason for the Clinton endorsements is the belief with the higher ups that Bernie Sanders isn't electable. Several months ago the U.S public thought the Bern was just a flash in the pan but look what he has accomplished since then. In addition to picking up the Communications Workers of America and earning a nod from the liberal group Democracy for America, Bernie has also hit his goal of 2 million individual campaign contributions. It sounds like to me a man on his way to the White House.
at December 17, 2015