Maybe confiscation of all guns is the answer 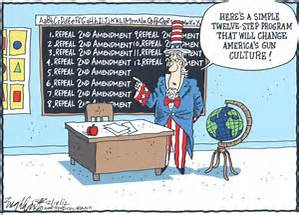 God forbid, I've been reading the National Review, but the idea hit home the minute I read it. Abolish the 2nd Amendment and confiscate all 300 million guns in the U.S. Obama vaguely covered that recently in reference to Australia's approach to gun control and of course this conservative publication picked it up and ran with it. We also heard the same old crap from the gun nuts; neither the gun show loophole nor background checks would have prevented the mass shootings or daily gun violence.

If none of the proposed changes that Pres. Obama plans in his Executive order on gun control will help, and the fact that apparently putting more guns on the street, the stupid idea of Wayne LaPierre, head of the National Rifle Assn., has only caused more gun violence, there is only one choice left. Abolish the 2nd Amendment and confiscate all 300 million guns in the U.S.

Yes, we've talked about improving mental health programs and corresponding databases but it hasn't happened and with all-states cooperation necessary to accomplish this, it isn't likely to happen. Just take Arizona, Florida and Texas as an example of those on the radical end of gun rights. We've no choice but to abolish the 2nd Amendment and confiscate all 300 million guns in the U.S. It will be expensive but isn't it worth 30,000 gun deaths a year, and the end to these mass killings?  I think so.

Once we have everything under control, start a program of controlled distribution of firearms, with registration required of every gun that goes out. And, I'm not saying that everyone who had a weapon, especially handguns, will get one back. In the new scenario, assault weapons would be banned, concealed carry only for those with special needs, and there would be universal background checks, the gun show loophole would be closed, ban straw purchases and the CDC would reinstate CDC collection and analysis of U.S. gun violence.