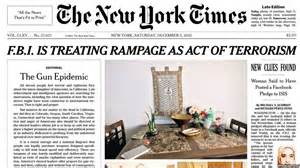 The New York Times front page editorial starts with, "All decent people feel sorrow and righteous fury about the latest slaughter of innocents, in California." Although, perhaps, not meant, but possibly implied, this would not apply to the members of Congress who are the cowards of the NRA's controlled minions of gun control opposition. They call these gun whores, "...elected leaders whose job is to keep us safe but who place a higher premium on the money and political power of an industry dedicated to profiting from the unfettered spread of ever more powerful firearms." WOW!

They talk about how civilians in the U.S.can go out and buy weapons of war, assault rifles like those used by the two terrorists in the San Bernardino killings. Sane thinking would tell any intelligent human being there is something very wrong with that except, of course, a gun nut. And the NYT attacks the nucleus of the problem which is the 2nd Amendment, saying, "No right is unlimited and immune from reasonable regulation." With this in mind, the right-minded people of this country should stand up and demand that the 2nd Amendment either be better defined or abolished altogether.

And it would help if someone ran the NRA's head, Wayne LaPierre, out of town...on a rail.