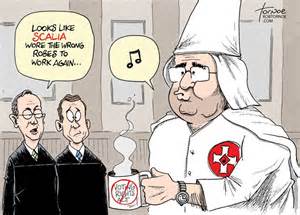 Senate minority leader Harry Reid said it best, "The only difference between the ideas endorsed by Trump and Scalia is that Scalia has a robe and a lifetime appointment. Ideas like this don't belong on the Internet, let alone the mouths of national figures." This is in reaction to Supreme Court Justice Antonin Scalia's comments re. admission practices at the U. of Texas:

"There are those who contend that it does not benefit African-Americans to get them into the University of Texas where they do not do well, as opposed to having them go to a less-advanced school, a less — a slower-track school where they do well. One of the briefs pointed out that most of the black scientists in this country don’t come from schools like the University of Texas. They come from lesser schools where they do not feel that they’re being pushed ahead in classes that are too fast for them."

If we ever wondered just how deep seated racism is in America, here is a prime example from the highest court in the land, coming from an individual that is supposedly well educated, though perhaps that is no cornerstone for common sense. Scalia should resign his seat on the Court and this demand should also be coming from fellow colleagues on the Court.
at December 13, 2015