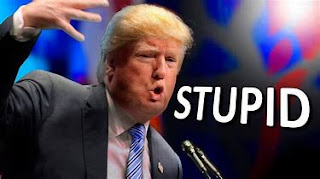 I blogged on Donald Trump considering the Chained CPI in his efforts to further penalize those at the poverty level. My post, "Trump going to penalize those on poverty line even more," quoted a statement from Arloc Sherman of the left-leaning Center on Budget and Policy Priorities...


"this change would mean that millions of people eventually could see their benefits either reduced or eliminated because they wouldn't be considered as poor as they were under the old measure."

The Washington Post thinks the Chained CPI is a good idea but in Trump's case would be a bad application. The WP explains that the term...


"refers not to some sort of punishment but to the fact that, for technical reasons, it is more closely linked to people’s buying habits than the version of the CPI the government usually uses to adjust various key program benchmarks for annual inflation."

However you look at it, the move "looks very much like an effort to cut spending on programs for the poor that the Trump administration would be unable to reduce through legislation." And would we expect any less.

Robert Reich in The Guardian exclaims, "There are many reasons not to impeach Trump. The House should do it anyway." It makes sense to me in that it would put the monkey on Mitch McConnell's back and when he obviously votes it down in the Senate, the voters can make their choice in 2020. Much has been said about Democratic efforts backfiring by holding the Oval Office lunatic accountable in the Mueller Report, but sane Americans can see through this.

Reich isn't so sure of my assertion saying it certainly won't get T-rump out of office either before or after the election, and because we won't find out much more about the man than we already know, why go to the effort. Here's why...


"It is whether an action designed to enforce our constitution is important for its own sake – even if it goes nowhere, even if it’s unpopular with many voters, even if it’s politically risky."

We can only hope and keep a close eye on the polls. And on another front, Donald Trump and the miscreants around him "continue to block more than 20 separate investigations by Democrats into his actions as president, his personal finances and his administration’s policies, according to a Washington Post analysis." WP sees it this way...


"Trump’s noncooperation strategy has shifted from partial resistance to all-out war as he faces mounting inquiries from the Democratic-controlled House — a strategy that many legal and congressional experts fear could undermine the institutional power of Congress for years to come."

In other words, the maniac in the White house is trying to break up a fundamental provision of constitutional government where Congress acts as checks and balances of the executive branch. That's called tyranny.

Then an Iran commander calls U.S. military in Gulf a target not a threat. CNBC explains...


“In the absence of a serious diplomatic channel, the current maximalist approach from the Trump White House could spark a new cycle of intentional or inadvertent military confrontation in the region.”

Just what we need, a war with Iran during the conflict with China, all on the heels of simmering feelings between the U.S. and No. Korea. Is John Bolton behind all this?